Difference of a Pinion

The Pinion watch design code values clarity over complexity and meticulous attention to detail on the dial, case, glass, and strap. And in those places where detail would add nothing, Pinion prefers to leave it out.

The watchmaking hub is based in the heart of Lancashire, run by the experienced British watchmaker, Ian Walsh. As an integral partner to Pinion, Ian provides technical assistance in the development and construction of watches and supports Pinion by providing watch servicing and repair.

Ownership of a Pinion watch is a new message to the future; an act of faith that something about its quality, creativity, and individuality will be cherished and remembered.

Pinion was formed in 2013 by a professional designer, Piers Berry.

Piers’ interest in watches first came about when he was a child during the digital revolution of the 1970s. Like most boys growing up around that time, Piers developed a fascination with science fiction, early computer games and naturally, digital watches.

Piers trained formally in graphic design in the early 1990s, specialising in typography and after graduating his first job was to work in early web and digital media agencies in London.

“My ambition in making fine watches is to succeed not in doing more, but doing better.”

In the 2000s, Piers co-founded a digital agency in Henley-on-Thames and was responsible for the design and production of digital experiences for over forty feature films. It was during this time, that Piers developed an interest in mechanical watches. The design and operation of these pieces were in many ways a world apart from Piers’ daily routine of dealing with pixels and code. Piers acquired a small collection of mechanical watches over the course of five years and furthered his interest by producing photographic and digital work for a couple of major watch brands. 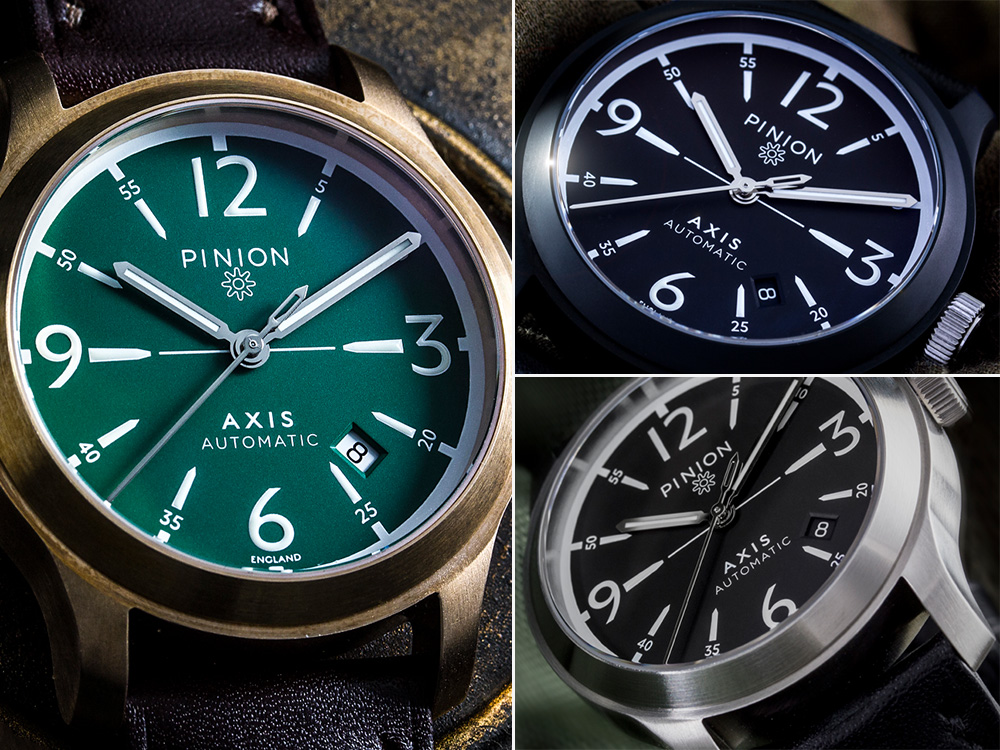 Driven by a desire to design a watch he could call his own, in 2013, Piers left his agency to conceive Pinion. He began by creating a debut watch collection, called ‘AXIS’ – a trio of automatic wristwatches that referenced instruments from the World War II era.

Pinion launched at British fine watch exhibition, SalonQP in November 2013, showcasing the Axis collection in a trio of different case finishes and metals.

The watches were retailed exclusively online via the Pinion website, selling out within 12 months.

Following this success, Piers went on to design two new watch collections during 2014 and 2015; the Pure and the R-1969, both of which utilised hand-wound mechanical movements.

It was during this time that the two new watch collections started to form a strong visual identity for the watch brand. The application of Typography, colour and case shape evolved to create a look that future watch releases from Pinion would reference.

In 2016, Pinion revisited its original Axis line with a redesigned, and
re-engineered Axis II plus additional models added to the hand wound Pure watch family.

In 2017, Piers designed two new watches. The first being Atom, which powered by a Japanese automatic movement and using different manufacturing techniques was able to retail for under £800. The initial run of the Atom watches sold out within months.

The second was Pinion’s first titanium cased watch, called the TT ( two time-zones ) which weighs 25% lighter than its steel equivalent. The TT was also the first Pinion to feature 24-hour second-time-zone (GMT) functionality.

In the six years since inception, Pinion has gained a notable reputation as a quality British watch brand and has sold its watches across the globe, with many customers coming back for repeat orders. This success is down to Piers’ passion and unwavering determination for nurturing the watch brand and the timepieces it releases.